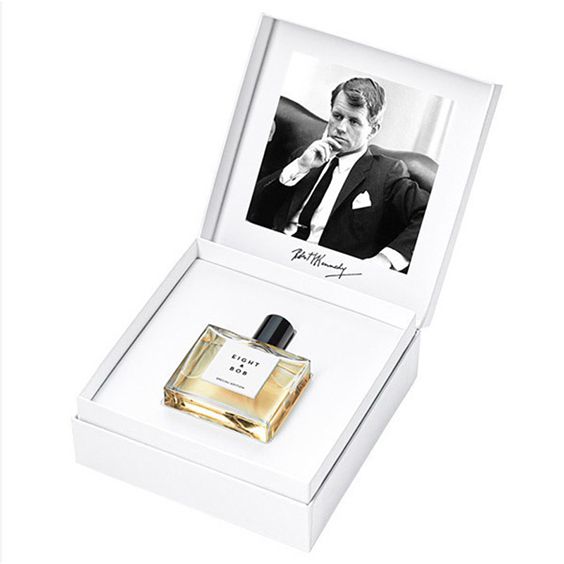 Skip to the beginning of the images gallery
Details
Eight & Bob presents this new fragrance in honor of this partnership with the foundation. Robert F. Kennedy Special Edition fragrance has been launched to commemorate the 50th Anniversary of Robert Kennedy’s historic presidential campaign. Eight & Bob will collaborate with the foundation by donating part of the revenue received from this special edition as a tribute to Robert F. Kennedy’s dream of a more fair and peaceful world.

Albert Fouquet from Paris is the maker of Eight & Bob,
his passion was his total use. Soon his name became known to French society and she wanted to have a bottle of Fouquet's exclusive perfumes.

Eight & Bob originated in 1937 on the French Riviera, where Albert Fouquet meets a young American student on a soirée,
who spent his summer vacation in Europe. This student was John F. Kennedy, who was to become president of the United States of America a few years later.

JFK was sold to the fragrance Albert Fouquet wore, on which Albert sent him the next morning a bottle of his perfume with a note: "In this bottle you will find a dose of the French glamor that misses your American symphony"

The smell was named Eight & Bob after JFK was already a few weeks back in America and a short sent to Albert and his asked for "8 samples and one more for Bob".
The smell is contained in a book hiding the Nazis during the second world war of odors from France to America not to intercept.